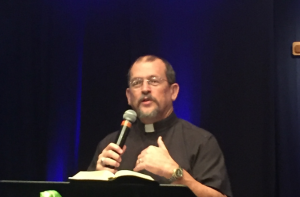 I was reared in Wilson, Ok in both the United Methodist and Pentecostal Holiness church traditions (circuit riders before Civil War in ancestry) and grandparents some of the first Pentecostals in Oklahoma. I encountered Jesus Christ as my Savior who died for me and as my Lord who arose for me at Falls Creek Baptist Assembly as a youth in a dramatic, Spirit from heaven moment. Later, I experienced the power of the Spirit in filling, healing, prophecy, tongues, and in brokenness-forgiveness-and seemingly unanswered prayers (a lot around my sexuality!). Completed 4 years at a Pentecostal Holiness college, and while at Graduate school at Southern Nazarene, met Mr. John Wesley, a Church of England priest who was evangelical, moved in the Spirit, and the founder of Methodism. So as I entered Seminary at O.R.U., I became a United Methodist pastor. In college, I had experienced a Catholic Charismatic Mass, and that led me to the Book of Common Prayer. It gave me form and prayers when I could not.

Later, as a pastor, went through a tornado that destroyed our parsonage with my family in it. I had married a beautiful, bright, and loving woman with whom I had two great children: a boy and a girl. Out of that trauma, this bright woman realized that a gay man should be married to another gay man! So divorce. I left the U.M. Church and was ordained (again) as a Deacon, then a Priest in an independent, Anglican group (which sought to merge historic liturgy, evangelical beliefs, and the Spirit-empowered life). I came out in 2011 and met my present partner, Ron. I work full-time as a chaplain at O.U. Medical, and pastor (early on Sundays) a house church called Church Home. It is made up of people who came out of a Presbyterian Church I pastored for 6 years. I am so blessed to be associated with Expressions and have watched this New Expression of Christ for several years. Thank you.

I have read the general terms and conditions and I agree!